We supply quality supplements free from ‘fillers’ or ‘bulking agents'. Most of our products are dairy-free, free from animal products and therefore suitable for vegans wherever stated. 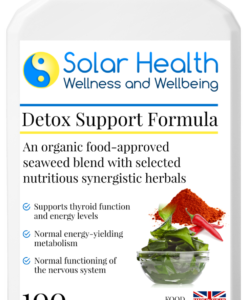 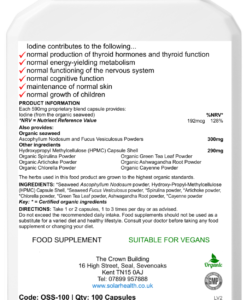 Detox Support Formula is a powerful all-in-one alkalising, cleansing, detoxification and daily nourishment formula, which combines the best of nutrient-dense foods from both the sea and Earth’s soil.

The 100% organic ingredients that have been blended in these capsules include: Seagreens® food-approved seaweed (Ascophyllum nodosum and Fucus vesiculosus), artichoke, chlorella, green tea leaf, spirulina, ashwagandha root and cayenne. This food supplement is iodine-rich and high in a broad spectrum of protective nutrients, including antioxidants, phyto-chemicals, polyphenols, enzymes, amino acids, vitamins and minerals.

Detox Support Formula is a powerful all-in-one alkalising, cleansing, detoxification and daily nourishment formula, which combines the best of nutrient-dense foods from both the sea and Earth’s soil.

The 100% organic ingredients that have been blended in these capsules include: Seagreens® food-approved seaweed (Ascophyllum nodosum and Fucus vesiculosus), artichoke, chlorella, green tea leaf, spirulina, ashwagandha root and cayenne.This food supplement is iodine-rich and high in a broad spectrum of protective nutrients, including antioxidants, phyto-chemicals, polyphenols, enzymes, amino acids, vitamins and minerals.

Included in this product are:

Ascophyllum nodosum: A large, common brown alga (Phaeophyceae) in the family Fucaceae, being the only species in the genus Ascophyllum. It is seaweed of the northern Atlantic Ocean, also known as rockweed, Norwegian kelp, knotted kelp, knotted wrack or egg wrack. It is common on the north-western coast of Europe (from Svalbard to Portugal) including east Greenland and the north-eastern coast of North America. Seagreens® Ascophyllum nodosum is sourced from the Scottish Outer Hebrides and is the highest of Seagreens’® species in terms of iodine levels – typically 700mcg iodine per 1g. Ascophyllum nodosum is harvested for human consumption, as well as for use in alginates, fertilisers and for the manufacture of seaweed meal for animals. It has long been used as an organic and mainstream fertiliser for many varieties of crops due to its combination of both macro-nutrients (e.g. nitrogen, phosphorus, potassium, calcium, magnesium, sulphur) and micro-nutrients (e.g. manganese, copper, iron, zinc etc). It is also host to cytokinins, auxinlike gibberellins, betaines, mannitol, organic acids, polysaccharides, amino acids and proteins, which are all highly beneficial.
Fucus vesiculosus: Known by the common name bladder wrack or bladderwrack, Fucus vesiculosus is a seaweed found on the coasts of the North Sea, the western Baltic Sea and the Atlantic and Pacific Oceans. It also known by the common names black tang, rockweed, bladder fucus, sea oak, black tany, cut weed, dyers fucus, red fucus and rock wrack. The primary chemical constituents of this plant include mucilage, algin, mannitol, beta-carotene, zeaxanthin, bromine, potassium, volatile oils, iodine and many other minerals. It was the original source of iodine, discovered in 1811. Iodine is an essential mineral for normal thyroid function, mammary gland development and foetal and infant neurological growth. It also has a powerful antioxidant and alkalising effect. The main use of bladder wrack (and other types of seaweed) in herbal medicine is as a rich source of iodine. It has been used in the treatment of under-active thyroid glands (hypothyroidism) and goitre. It has also been shown to help women with abnormal menstrual cycling patterns and menstrual-related disease histories. Overall, seaweeds form an essential source of natural iodine and are described as an ideal food-safe natural source of the mineral. Iodine is proven to be highly beneficial in the diet and significantly deficient in western diets.

Seagreens® : higher antioxidants than fruit and vegetables, and available in the gut too. These seaweeds provide a natural nutrient-dense food with multiple benefits. Here we focus on research from Newcastle University, UK, which compares the antioxidant capacity of Seagreens® to fruit and vegetables. The research demonstrates the high antioxidant capacity of the seaweeds still available in the gut after enzymatic digestion (i.e. simulating after digestion in the stomach). This research concluded that Seagreens®:

Importantly, the research states that the antioxidant capacity of these seaweeds remains high through digestion in the initial stages of gastro-intestinal digestion. This suggests that a high concentration of antioxidants will be released within the gut lumen, where it can provide protection from oxidative damage. Seaweeds, or ‘kelps’ as the wild brown algae are sometimes called, are also known to assist the acid-alkaline balance, have a prebiotic effect on gut flora, help protect the gut lining, stimulate the secretion of digestive enzymes, assist nutrient absorption and metabolism, and thus strengthen immunity.
Spirulina: A highly nutritious food derived from plant plankton and a blue-green micro-algae, spirulina contains 18 amino acids, including 8 essential amino acids which the body cannot produce from its own resources and have to be replaced daily by food. Rich in beta-carotene, vitamin E, vitamin F factor (GLA) and iron, it grows naturally on alkaline lakes and is used for its high
level protein, vitamins and minerals. 100g of spirulina yields 50-70% protein. Its exceptional levels of vitamin B12 is of special interest to vegetarians, vegans and non-meat eaters who, unless they study their diets carefully, may be deficient in this important vitamin.
Artichoke: Artichokes have traditionally been used in herbal treatments to promote a healthy liver and efficient digestive system. One of the primary active constituents in artichoke is cynarin – a compound that has been used in Europe for several decades to lower elevated blood lipids (such as high cholesterol and triglycerides), lower total serum levels and at the same time
increase beneficial HDL levels – this therefore offers ideal support for the prevention of heart disease and liver cleansing. More than 50 years ago, Japanese researchers also found that artichokes can boost the production of bile by the liver, which can in turn break down fat. Cynarin is the close botanical cousin of the herb milk thistle.
Chlorella: An edible, single-cell marine algae (a sea-moss, sea lettuce), chlorella contains more chlorophyll than many known foods, more vitamin B12 than liver, along with beta-carotene, polyunsaturated fatty acids and 19 amino acids (including the 8 essential amino acids). It is also a rich source of calcium, iron, selenium and zinc. It provides useful detoxification support because it can bind with heavy metals and pesticides (such as PCBs), which can accumulate i

NO filler, additives or binders

*Certified organic ingredients: 100% of the agricultural ingredients are produced in accordance with the rules of organic production. EU/non-EU agriculture. The herbs used in this food product are grown to the highest organic standards. 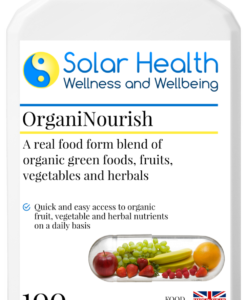 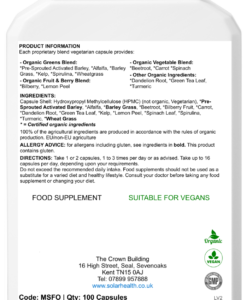 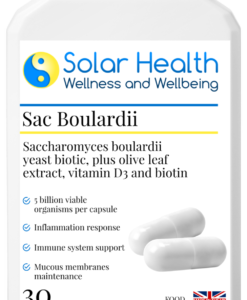 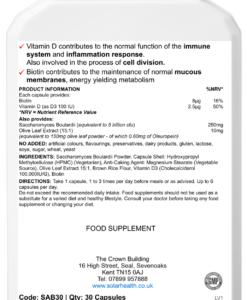 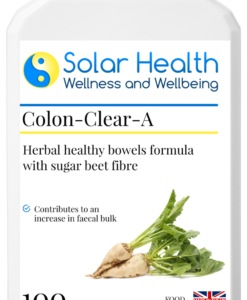 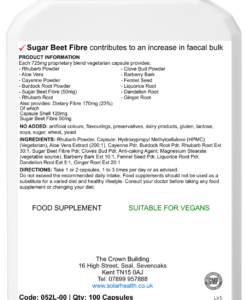 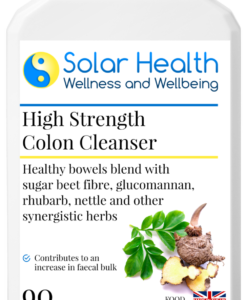 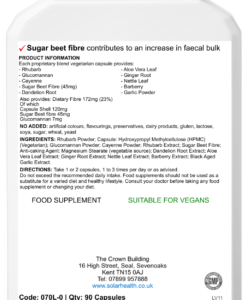